Barrister’s Gallery pays tribute to one of New Orleans’ most distinctive artists
By Bill Sasser / Feb. 9, 2005

With the advent of Lent later this week, Barrister’s Gallery offers an art opening that fits a post-Mardi Gras mood of reflection and atonement, a show that includes a memorial tribute to one of New Orleans’ darkest and most distinctive artists. 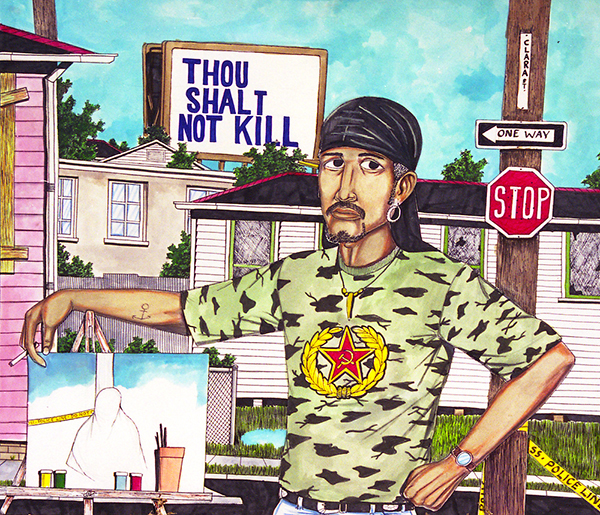 A centerpiece of Hydriotaphia: Artists Design Their Own Funeral Urns, will be a commissioned urn holding the ashes of Roy Ferdinand, who died on December 3 from cancer. A self-taught artist who called his work “urban realism,” Ferdinand often mixed the eye of a social critic with the exaggerated, self-aggrandizing style of rap in his uncompromising views of life in the New Orleans ghetto. Similar to Barrister’s critically acclaimed Lenin show in 2001, in which participants were given plaster busts of the Communist icon to turn into pieces of art, gallery owner Andy Antippas was inspired to stage his urn show after rereading English essayist Sir Thomas Browne’s “Hydriotaphia, Urne Buriall, or A Discourse of the Sepulchrall Urnes lately found in Norfolk.” Published in 1658, Browne’s description of the discovery of 40 Roman burial urns turns to a meditation on the transience of life, the certainty of death, and our overwhelming fear of oblivion.

“He brilliantly writes about out how death utterly erases identity, but my thought was that if someone were to create a funeral rite that could somehow preserve the personality and life of the deceased, who better than an artist making his own urn?” says Antippas. “I would argue that every work of art is a funeral urn, since any true artist buries themselves in their work, or at least puts a large piece of their soul into it.”

Unlike the Lenin exhibit, artists for this show were given free rein to use any medium or dimension for their creations. Ferdinand, associated with Barrister’s Gallery for over 15 years, had planned to participate. Cremated after his death, his sister Faye Powell entrusted Antippas with his ashes. “I couldn’t think of any place that would be better,” says Powell. “Roy’s art was his life and Barrister’s was like his second family. The gallery is where he belongs.” 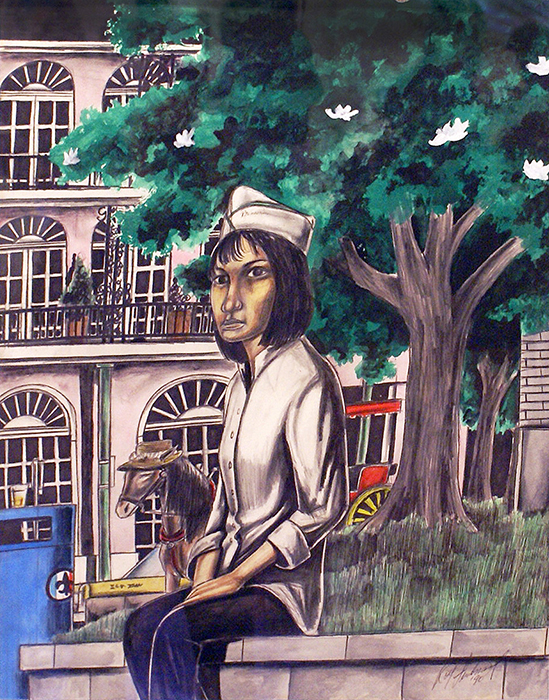 Antippas has commissioned two artists who were friends of Ferdinand, Jeffrey Cook of New Orleans and Renee Stout of Washington, D.C., to create an urn that will be accompanied by a display of his artwork, photographs, and personal effects. “Voodoo was one of the themes for Roy’s art and he was a practitioner of Santeria,” says Antippas. “Anyone who knew him will instantly recognized his personality in these belongings, which in this context could perhaps be called artifacts of the spirit, evoking Roy in the way that the sacred objects of a voodoo altar invoke the deities.”

Along with his artist’s box and portfolio, black cowboy hat and spurs, Star Trek novels, action figures and videotapes of horror movies will be a sampling of the medical bills that totaled hundreds of thousands of dollars by the time of his death. Ferdinand, who lost his job a year ago, had no health insurance. While he died virtually broke at age 45, his work is part of the permanent collections of the Ogden Museum of Southern Art, the Louisiana State Museum and The House of Blues, and was featured in the New Orleans Museum of Art’s Triennial exhibition in 2001.

“I’ve been around long enough to know what’s good and what’s not good and I instantly knew that Roy was good,” says Willie Birch, a nationally prominent African-American artist who nominated Ferdinand for inclusion in the 2001 Triennial. “To me he was fearless and that was his strength. Roy will go down as one of the more significant artists to come out of New Orleans. His work is set in a timeframe and will grow in strength as the years go by.” 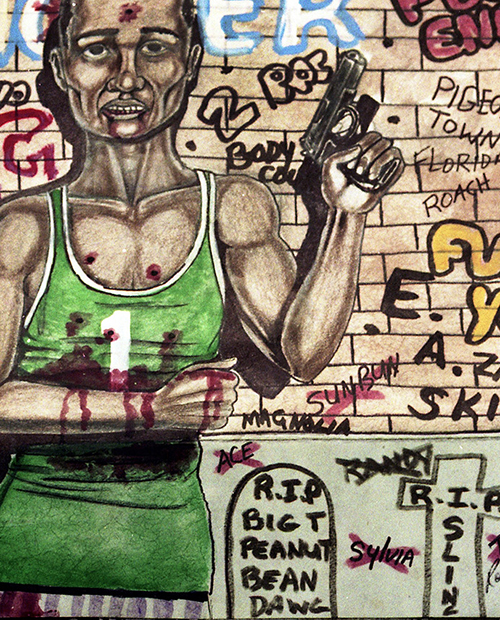 Ferdinand was a self-taught artist with few parallels. Drawn on matte and poster board, his best work offers compositionally sophisticated, realist portraits of life in New Orleans’ impoverished Black neighborhoods that are by turns sweet, sardonic, tragic, bizarre, and horrific. Graffiti is a recurrent motif, with walls and fences covered in the signs and symbols of a violent underworld.

“A name crossed out with an X shows someone killed by a rival gang, a name inside a tombstone is a tribute to a gang member or a friend,” he once explained to an interviewer.

“A lot of times I use people I’ve known who’ve died on the street.” His self-portraits showed himself as, conversely, a Western gunslinger in a New Orleans ghetto and an artist-revolutionary critiquing the street culture around him. An obsessive fan of horror films, Ferdinand’s more imaginative pieces blur the boundaries between truth and fiction while often seeming to glorify the same outlaw mentality and violence he examined almost journalistically elsewhere.

“Death was a continuing fascination for Roy and a major theme in his art,” says Antippas. “Much of his work has a gothic sensibility and this may have become more prevalent after his first brush with cancer.”  Ferdinand had undergone emergency surgery for an ulcer in 1998 when doctors discovered stomach cancer, which his mother had died from two years earlier.

He recovered quickly, but his personal problems extended beyond his health. He had been homeless for nearly six months in 2000 when he enrolled himself into Responsibility House, a drug and alcohol rehabilitation program on the West Bank. After eight months in residence he checked himself out and began working full-time for a local hotel company while producing some of his best art. In 2002 he was part of an exhibit at the American Visionary Art Museum in Baltimore titled “High on Life: Transcending Addiction.” His struggles making ends meet continued, however. For the past two years he had lived alone in an apartment in Metairie, his bid to escape the culture of violence and drugs that he depicted brilliantly in his art and that often surrounded him in the neighborhoods where he had lived. 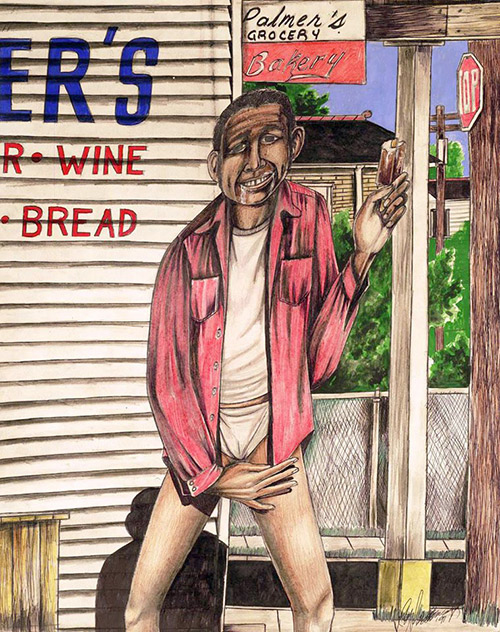 “Roy could have been book smart if he wanted but chose not to-he was street smart instead,” says his sister Powell. “When he dropped out of high school and took the high school equivalency exam to join the Army, Roy scored so high they thought he cheated and retested him twice. Roy was a genius. Since he’s died we’ve found out so much about him that we didn’t know. It seems like the people who loved him the most were the people who didn’t have to, who knew him because of his art.”

An often-contradictory personality who could be by turns wildly funny, disarmingly charming, irrationally demanding of family and friends, and tragically self-destructive, Ferdinand left an indelible impression on those who knew him. “He was someone I wanted to hang out with, a very intelligent guy who seemed he could talk about almost anything, very philosophical about things and very approachable,” says Cook. “He went places in the hood that I would have liked to have gone but didn’t and they accepted him there for what he did. People would say ‘Ferdinand, he’s the guy who does that ghetto art,’ but I knew there was always a lot more going on in his drawings and that he was an important artist. There was no shame in his game and he told it like it was. Roy was a friend and a person of substance and it was very important for me to do his urn.”

Ferdinand’s circle extended beyond New Orleans. Bob Roth, publisher of the Chicago Reader, knew Ferdinand personally and flew to New Orleans in December to attend his memorial service. “I like his work immensely but can’t precisely tell you why, just that the first time I saw it, I took one look and said ‘this is New Orleans,’” explains Roth, who owns one of the largest private collections of self-taught art in the U.S., including over 100 drawings by Ferdinand. “His subject matter is morally askew and what often makes his style so powerful is that it’s also off-kilter, a look that makes it seem weirder, perhaps morally off, which was what his art was about. Roy was something of a legend in his own mind and created this outlaw image for himself—proud to be a scoundrel—which of course has a long tradition in New Orleans.” 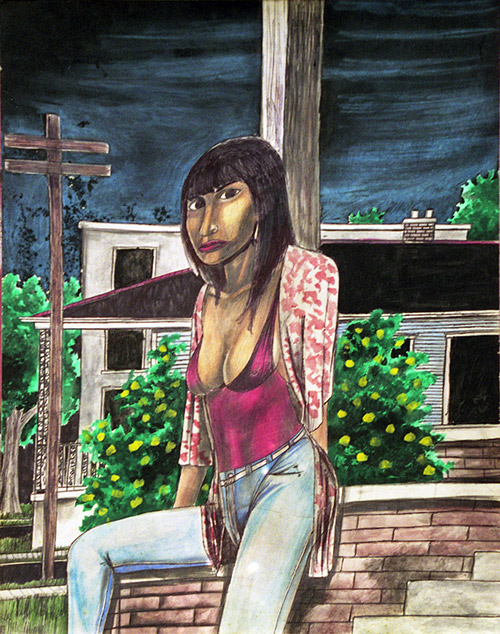 Where Roth perceives strangeness Birch sees echoes of Africa. “He often used a repetition of line and angles that are similar to African geometric patterning, with an almost syncopated rhythm,” says Birch. “He was very inventive with his style, which I would describe as a mix of cubist and surrealist, surreal in the way he juxtaposed figures and often drew distorted perspectives, cubist in the way that the architecture of the city featured prominently in his compositions. Something about his madness and form forces you to see things in different ways. Roy is one of the artists I feel closest too in terms of trying to say something about our existence.”

At Barrister’s opening on Saturday, Ferdinand will again ask viewers to contemplate stark truths. “A lot of artists have had a problem with doing the show,” says Antippas. “An artist in New York was going to do an urn for me but reconsidered. He called and told me this old Hungarian proverb—don’t paint a devil on your wall, you may be inviting him into your house. Statistically, if you get fifty-two people together in a room, the odds are almost one hundred percent that two people of them will have the same birthday. I joked that if I got fifty artists to do this show, one of them was going to die before the opening, but it wasn’t a joke. Instead it’s a chance for the people who loved Roy to say goodbye.”