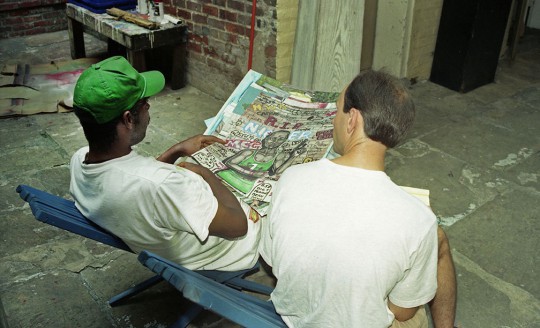 I was in grad school back in 1996 and came to New Orleans to work at a magazine that summer, and discovered Barrister’s Gallery. Roy was among the “artists in residence.” After seeing a few dozen of his drawings, and within five minutes of meeting him, I knew  Roy was an important artist. He had a genius for composition, and capturing character with a few deft strokes, but an almost journalistic approach to his subject matter. He delved into important aspects of life in New Orleans, and many other American cities, that’s often glossed over or ignored for various reasons. And beyond his huge artistic talent Roy was a larger than life character—funny, charming, razor smart, but also dealing with some dark issues of his own. His demons were his inspiration, and his art was often a means of trying to deal with them. I followed Roy and his art for nine years. We became good friends, and more involved than I ever would have imagined. Over the years, while I knew Roy and after his death, I was amazed at how many people he knew and how strong a connection many also felt to him.

Roy was my brother and we grew up together on South Genois Street, right by Xavier University. Roy was drawing for as long as I remember. He was flunking out of school because he was spending all of his time drawing in his notebooks instead of paying attention.

He dropped out of high school after a year and joined the Army. He scored so high on their high school equivalency test that they thought he cheated, so they retested him twice. He scored better every time, scoring at genius level. Roy was a genius. He could have been book smart but chose not to, he was street smart instead. He didn’t stay in the Army long, though, and then he was back in New Orleans.

Growing up with Roy was hard, he would do things like drop bugs down your back, just to watch you squirm. He liked to play with fire, and fireworks, and people in the neighborhood were afraid of him. His was six feet tall by the time he was in the sixth grade. He was tall and he was big—he had to lose weight to get into the Army.

A lot of things that Roy did were for the attention, he wanted attention. We grew up in a very abusive household. My daddy never beat up on Michele, our younger sister, but he used to beat up on Roy real bad. Roy’s solution was to join the Army, mine was to fight back. You can only take it so much until you start defending yourself, and when I did our dad stopped beating me. Maybe if Roy would have defended himself, because he was way bigger than my daddy, then he would have stopped that, too.

Roy was fascinated with death, or at least the fantasy of death. We had a ghost in the house we grew up in, our Mama’s house. His name was Frank. From what I understand the man had died in the kitchen, he’d been stabbed during a card game. We used to find things in the house rearranged over night, and hear doors opening and shutting. There were other families who had lived in the house who said they’d encountered him, too.

Roy was obsessed with horror movies—The Legend of Boggy Creek was his first one and he was hooked—and with science fiction, too, shows like Star Trek. He named his dog Khang and taught him to obey commands in Klingon. When he was homeless for awhile, he left the dog for me to look after, and never forgave me for putting him to sleep when the dog got sick.

After the Army, Roy went to work as a security guard, and at one time or another must have worked for every security company in New Orleans. He always wanted to be a cop, and was always playing with guns. He wanted to have a gun and shoot a gun. He was a reserve deputy with the Orleans Parish Sheriff’s Office and won trophies in the shooting competition.

Roy never stopped drawing. He would go to cemeteries off Washington Avenue and Rocheblave and draw. He went over to the other side of Washington Avenue, into Gert Town, and traveled in circles that I did not frequent. The people in his drawings are not necessarily real people, some are, some not. A few people I recognize, faces from our neighborhood. Roy stayed with me on and off for a few years, after our mother moved out of her house, then after she passed away. He was drawing all the time and would do these pictures so fast, especially when he was high. He’d be sweating and sit down in my living room with a card table and do two or three in one night. He would knock them out.

I have a lot of love for Roy, but I also had a child, my son Ahkim, and I could not allow him to disrupt my life. I put him out. When he was out on the street he would meet me at my job and I’d bring him food, and every once in a while I’d bring him money to stay in the shelter. I gave him a starter jacket that was stolen from him at the shelter.

We found out so much more about Roy after he died than we knew about when he was living. So many people showed up with his funeral, people we had no idea about, all kinds of people. It was like discovering The Secret Life of Roy. It was comforting to see all these people who knew him from being an artist, and they really cared about him, enough to make a point to come to his funeral.