The Streetwise Art of Roy Ferdinand

Raw in details and viscerally effective, the drawing shows a desperate man being attacked by a police dog as he hides under an old clapboard house. In the foreground, cropped at the shoulders by the edge of the poster board, an anonymous police officer points a pistol at the man’s head. While his guilt or innocence is unknown, the scene tells a vivid story of horror and humiliation. 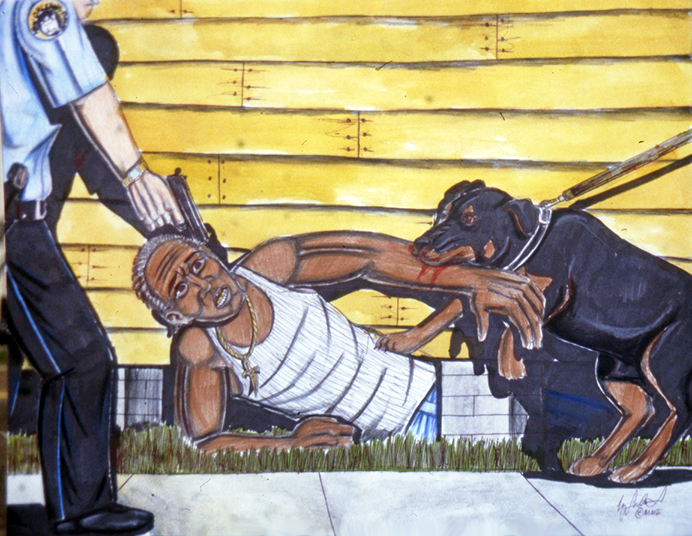 “I don’t really have to make any of this up—I can see or hear about things like this standing on a corner in Gert Town,” says Roy Ferdinand, who’s lived most of his life in the tough New Orleans wards that he depicts in his art.

A self-taught artist best known for his near-documentary depictions of the city’s often violent backstreets, he has a straightforward answer when asked to explain his work: “I just call it my art.” Within the categories of folk art, Outsider Art, and Art Brut, however, Ferdinand has few direct parallels. Drawn on poster board and colored with drug store art materials, including ink markers, colored pencils, and children’s watercolors, his best work offers compositionally sophisticated, realist portraits of an often unseen New Orleans that are by turns sweet, sardonic, tragic, bizarre, and horrific.

“A lot of the people I do I really don’t know, don’t even know their names—in these neighborhoods, you’re better off not knowing names,” says Ferdinand, 44, a huge man with a deep, booming voice and a smile that seems easy-going. “It’s very rare that anyone in places like Gert Town actually sees what I do. When they do see it, they say ‘Oh, this is real.’”

Ferdinand compares himself to a battlefield sketch artist and is sometimes inspired by the front pages of the local daily newspaper, The Times-Picayune. Other, more imaginative pieces seem to glorify the same outlaw mentality he critiques almost journalistically elsewhere, often with an almost gothic sensibility that delights in challenging viewers. Yet Ferdinand’s art extends beyond the “gangstas” that to a degree have typecast him as an artist. 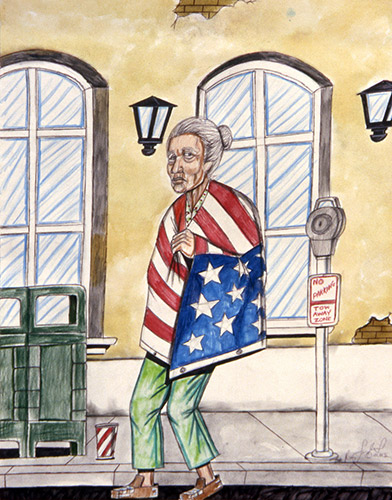 Known in New Orleans art circles as a sort of “Goya of the ghetto,” Ferdinand has described his work as rap in pictures, while some critics have placed his utterly honest depictions of inner city decay within the social realist tradition of Courbet. His minimalist style of drawing and limited palette is far from painterly, however. Working without a studio and composing from memory, he draws on any flat surface he can find. Sometimes using a piece of mat board on his knees as a table, he has an uncanny gift for revealing character through a nuanced tilt of a head or an almost invisible smile with a few deft strokes of his pencil.

The spontaneity, voyeurism, and aggressive, in-your-face quality of Ferdinand’s art arguably has more in common with the neo-realist photographers who, using new, fast films and hand-held cameras, turned their lenses on the urban theatres of mid-20th century America. Represented by the New York School that includes Robert Frank, Helen Levitt, and Diane Arbus, they rejected tradition for speed and informality, offering close-up views of lives on the margins.

The closest analogy to Ferdinand is perhaps Arthur Fellig, the self-taught New York news photographer known as ‘Weegee,’ made famous by his tabloid images of bodies under sheets and pathos from the street. Working out of the trunk of his car, Weegee was noted for his ability to be the first on the scene of the singular tragedies that were his material: murders, arrests, suicides, fires, and car wrecks. His most memorable photographs are marked by their masterfully framed, frontal approaches, employing flash lighting that flattened his compositions. An outsider in Manhattan art circles, his unorthodox subject matter and techniques produced an idiosyncratic body of work that is immediately recognizable.

Ferdinand brings the same noir sensibility to drawing, offering a startling contrast to familiar, postcard views of New Orleans, a city where the murder rate is among the highest in the U.S. An obvious parallel in his work to the neo-realist photographers is a frontal approach and flat composition.

Although Ferdinand works in color, the cheerful, primary pastels he favors—dictated in part by what is on the shelves of local drug stores—offers an ironic counterpoint to his subject matter: a drug dealer flashing a gang sign, a mugger stalking a victim, a prostitute working a street corner. “That’s real,” he says, when asked for the background on his depiction of a drive-by shooting, featuring a precisely detailed weapon. “When drive-bys were common around here, for a long time the preferred way of killing someone, the weapon of choice, was an Uzi.” 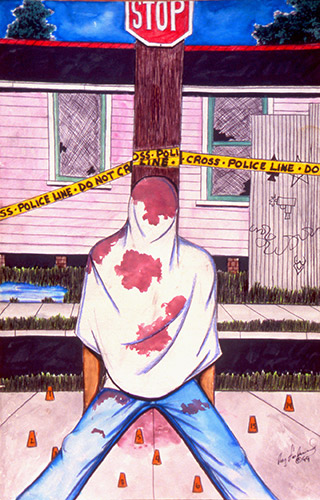 Ferdinand’s work was part of a recent exhibit at the American Visionary Art Museum titled “High on Life: Transcending Addiction”—a show that offered artists’ responses to substance abuse—and he clearly identifies with the characters he portrays. His biography of the past five years includes serious health problems, near homelessness, and residence in a drug and alcohol rehabilitation program.

Drawing for Ferdinand has been a life-long calling. He remembers spending most of his time in high school drawing comic strips in his spiral notebooks, and flunking all his art classes. “Me and the teacher didn’t get along too well,” he remembers. “He kept telling me how to hold my pencil, and that’s like telling someone how to piss.” After dropping out of high school, he briefly served in the Army and spent several years in a street gang. Ferdinand describes a variety of jobs that followed, including work as a morgue assistant, a sign painter, and as a guide for a voodoo walking tour in the French Quarter, before starting his career as an artist. Over the past decade he’s created thousands of drawings scattered among museums, galleries and private collections across the country.

“If I go more than two or three days without drawing, then I just have to sit down and do it,” he says. “Drawing is something automatic for me now, like smoking.” Ferdinand’s work is part of the permanent collections of the Ogden Museum of Southern Art in New Orleans and The House of Blues, and was part of the New Orleans Museum of Art’s Triennial exhibition in 2001. He explains a drawing of a young man who has been gunned down on a city sidewalk as a study in colliding character, environment, and fate: “Maybe he was a drug dealer, maybe he wasn’t—all you know is that his life came to an abrupt, violent end. In some ghettos you can walk around and find scenes like this—it’s gotten so common that to a degree I’ve been desensitized to it. It’s hard for me to explain why a lot of this goes on. A lot of times what people don’t realize is that—people can’t help what they become. We live in a really strange, complex world. It’s a world only we can see, and a culture where to show kindness is weakness, to show feeling beyond indifference is weakness.”

While often stark, Ferdinand’s drawings are also marked by irony, metaphor, and a sometimes startling humor. Street signs are a favorite detail—in many pieces ONE WAY and DEAD END stand behind young men wearing gang colors and holding weapons. While Weegee burned the backgrounds of his photos to a black matte to heighten the drama of his subjects, Ferdinand masterfully uses his skills as a draftsman and knowledge of New Orleans’ backstreets to charge the atmosphere of his drawings. Beauty and menace somehow both show through in his azure skies, jumbles of sub-tropical vegetation, makeshift fences, and odd-angled buildings with broken windows and boarded doors.

Ferdinand also produces work that has no direct documentary connection. Prominent among these are several series of women with guns, drawings that seem to play on cultural, racial, and gender stereotypes while also subverting them. Named after the street slang for a 9 mm pistol, his “Nina” portraits depict mostly-undressed women displaying weapons that are rendered in almost-fetishist detail, their poses similar to models in a tool company calendar from another era. The drawings could almost be called campy, except for the pain in many of their expressions, and are perhaps more disturbing for their ambiguity.

In a series of self-portraits Ferdinand crafts himself as, conversely, a Western gunslinger on a New Orleans street corner and an artist-revolutionary critiquing the culture around him. Taken together, his art offers a singular vision that could be considered an on-going autobiographical project. His best work finds an intensity arriving at some often-traumatic truth, while brilliantly evoking his home of New Orleans. 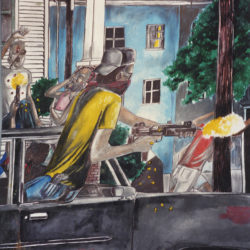 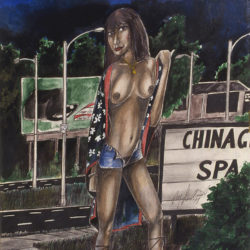 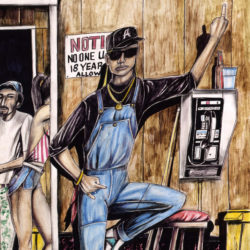 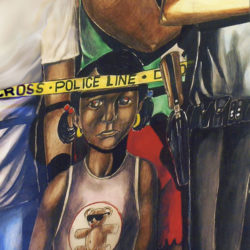 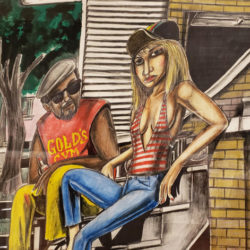