Roy Ferdinand Was Here. What Are You Going to Do About It? 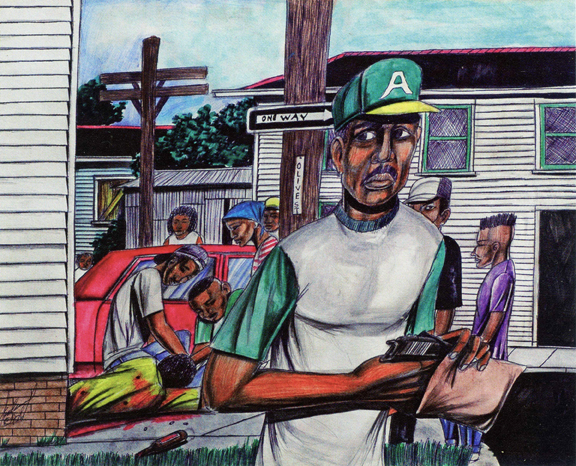 New Orleans artist Roy Feridnand (1959-2004) was born in the Gert Town neighborhood and during his unsettled life lived all around the city. When things got tough and he couldn’t make rent, he stayed with his dad, sisters, a friend, or crashed in the back of Barrister’s Gallery in the French Quarter. Barrister’s owner Andy Antippas had first admired Ferdinand’s colored drawings—sci-fi themes and portraits of friends—in the late 1980s and encouraged the artist to focus on the familiar.

He soon delivered the unflinching artwork that became his signature. With clean lines and evocative details, exploring what he called “the black urban warrior myth,” Ferdinand depicted his subjects on the streets where they lived.

At first glance, his themes may appear kindred to gangsta rap’s glorification of violent and misogynistic behavior, but an informed viewer will find little glory in this work. The needle-riddled skin of a junkie; a tired man asleep, leaning on a counter at a race track; a naked woman handcuffed in the wake of a police raid—Ferdinand had a hard-nosed empathy for his city and its inhabitants. Almost all of his subjects stare you down—the gun wielding kid posing on the hood of a car; a saxophone player leaning against a wall; a saucer-eyed little girl standing behind yellow crime scene tape. 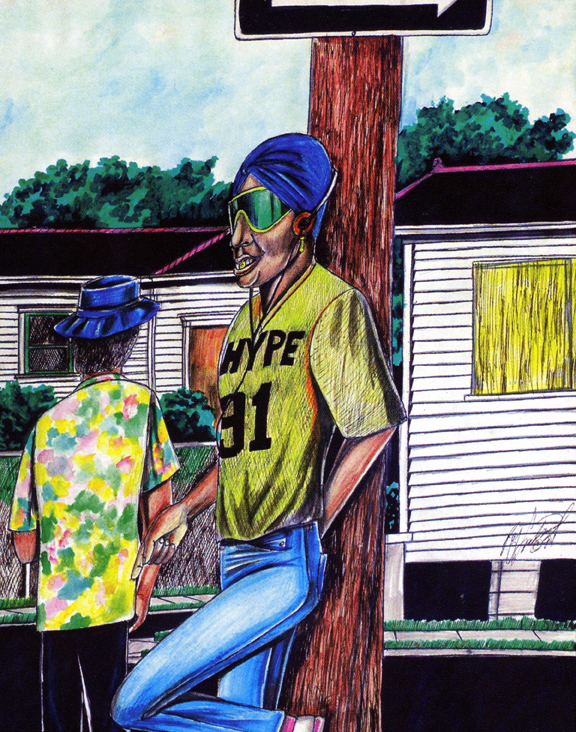 Those unwavering, often defiant glares pull you into his work, to face a struggle that you never volunteered for. Street signs often feature in Ferdinand’s work and add yet another layer of commentary. In one, a Stop sign looms over a gun-toting thug. In another, a woman in cutoff jeans, brandishing a firearm, kneels on a cash-strewn sidewalk beneath a Yield sign. Ferdinand knew some of his subjects, and also drew inspiration from local newspapers. Sometimes he visited crime scenes, bringing a documentary aspect to his starkly presented facts.

“Roy’s best pieces are allegorical statements,” says Los Angeles philanthropist and art collector Gordon W. Bailey, who owns one of the largest collections of Ferdinand’s work. “Whether or not he personally observed all he created, he bore constant witness. He wasn’t asking for sympathy, he was demanding change.” 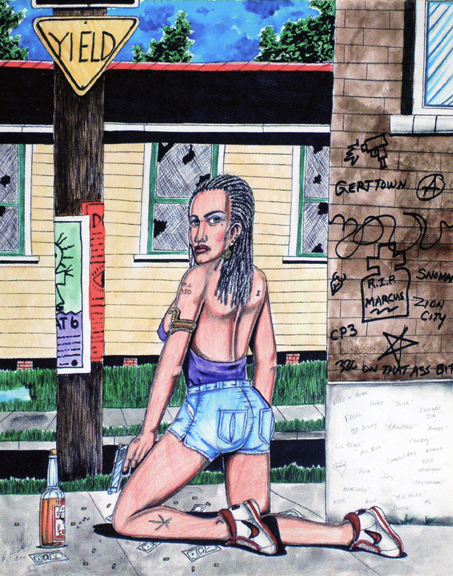 Throughout his adult life, Ferdinand fought battles with drug and alcohol. While raised a Christian, he was a devotee of Santeria, a mix of Catholicism and West African faith traditions. Native to Cuba, Santeria is similar to Haiti’s voodoo, which was brought to New Orleans by Haitian slaves in the early 19th century. Still practiced in New Orleans today, Ferdinand portrayed these traditions in his art and found solace in his own faith, says Renee Stout, an artist based in Washington, D.C.

“These African-based belief systems offer a sense of empowerment in challenging circumstances, as it did for our African ancestors who found themselves enslaved in North American,” says Stout, who was a friend of Ferdinand. “Roy’s art worked on many levels, and his depictions of voodoo also allowed him to create a sense of drama and intrigue. He was telling an ongoing story.”

Indeed, Ferdinand was known to consciously reshape his persona and regularly contradicted himself in interviews, stylizing his “ongoing story” for the uninitiated. 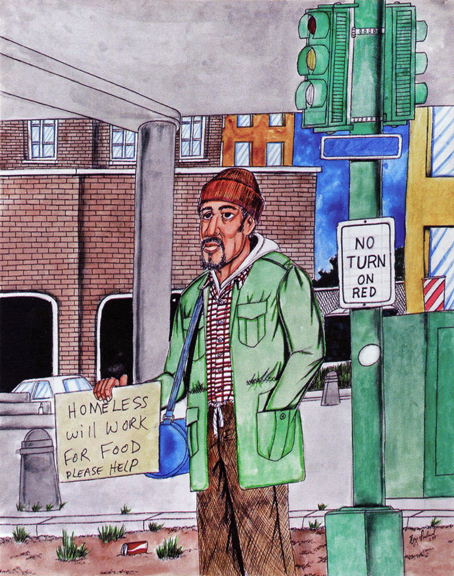 After Ferdinand’s death from cancer in December 2004, his ashes were part of a group show at Barrister’s Gallery, in which artists were tasked with designing their own funeral urns. Stout and artists Jeffery Cook collaborated constructing an urn for Ferdinand, in part using a movie prop automatic rifle that a Hollywood film producer had sent to him as a gift. Stout says she wanted the urn to represent “the sensual and mysterious side of Roy… The gun represented the hard reality of his environment and the hard shell that he had to create, to protect the sensitive side of himself that always saw too much.”